With Blizzard’s plans for Overwatch League’s international roadshow quickly approaching, many begin to question the viability of the impending travel costs. Both physical and financial costs may be too much for players.

Blizzard released this information in August 2019 along with their entire schedule for 2020. However, the conversation about the changes never made headway until it was recently brought back by Tyler Erzberger. 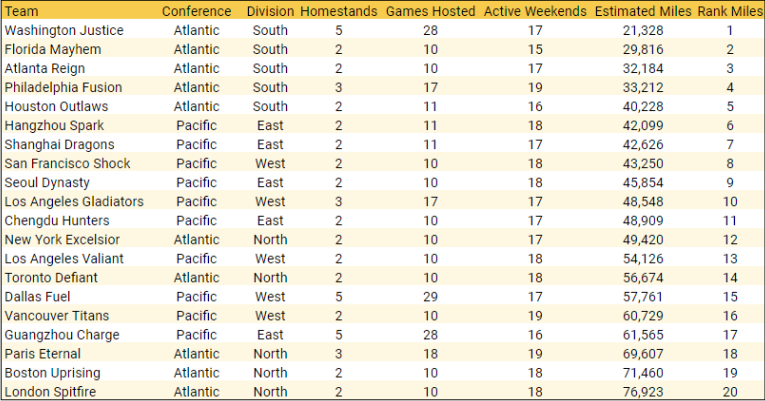 London Spitfire will likely travel upwards of 76 thousand miles over the course of the season. Teams like Washington Justice will only require 21 thousand miles of travel. Blizzard’s new system intends to connect fans more closely with their favorite teams but will be far more taxing on the players and teams themselves.

Esports leagues like the League of Legends Championship Series are stationed in one place for the season until playoffs. This allows teams to focus more on their gameplay, avoiding the fatigue of travel. Players already have grueling training regimens, often with more than eight hours of practice per day. OWL players must balance both. It is common for the average person to feel fatigued when simply traveling to visit family. But when a career relies on staying in peak competitive conditions, the effects of travel will become apparent in players’ performances.

In a study exploring the negatives effects of travel in the NBA, it was found that west coast teams, with less distance to travel, scored higher average points per game than their east coast counterparts. OWL is mimicking that model of traditional sports. But at the same time, they will be mimicking their negatives.

Esports leagues are still in their infancy and don’t have the same financial backing that the NBA does. When NBA teams travel, they usually receive first-class accommodations. Some OWL teams have similar if not more travel distance but much less of the support. OWL players likely will have to compete while dealing with regular economy class travel.

The difference between teams that booked several homestand games and teams that did not is staggering. Dallas Fuel and Washington Justice could gather an advantage simply from their low travel time alone. While there are positives to Blizzard’s new system, only time will tell if the increase in fan engagement can make up for the detriment on players.