Call of Duty League is finally back in action and the 2021 season starts with an explosive esports event, Kickoff Classic, showing off all 12 teams and their rosters.

Announcing the #CDL2021 Kickoff Classic! Join us January 23-24 for a special one-year anniversary of the Call of Duty League.

On the weekend of January 23 to January 24, all 12 Call of Duty League teams will participate in six fan matches. During the CDL offseason, fans voted to see which teams should face each other at the start. This event takes on the wishes of Call of Duty esports fans and pits fan-favorite teams against each other.

This two-day event shows six preseason matches previously voted on by fans. Notable Call of Duty esports personalities around the world also come together to discuss the 2021 CDL season. The official 2021 Call of Duty League season schedule and Stage 1 Group Selection Show will also debut here. These CDL Kickoff Classic matches don’t count towards any points but it does get the community ready for the new season. 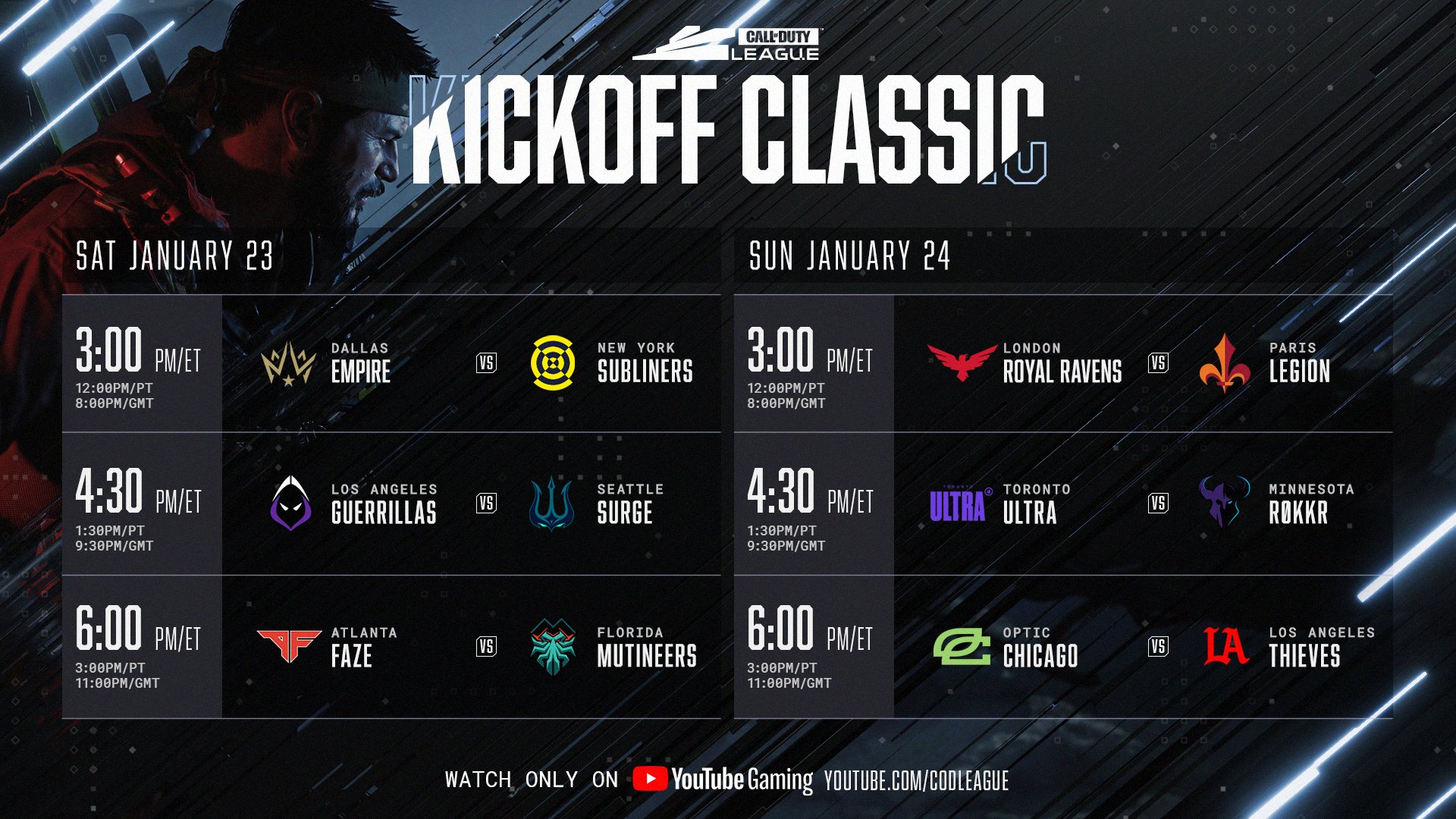 Regarding the matchups, all 12 teams participate against other teams they didn’t expect to face. During the two-day weekend event, six CDL teams will face off in three matches. On Saturday, January 23, the competition starts at 3 PM PST with the 2020 CDL World Champion Dallas Empire plays against the New York Subliners. Following that, Los Angeles Guerillas face Seattle Surge at 4:30 and Atlanta FaZe goes up against Florida Mutineers.

On Sunday, January 24, the final six teams play each other to wrap up the Call of Duty esports event. Like on Saturday, each match starts at 3 PM, 4:30 PM, and 6 PM PST. London Royal Ravens start against Paris Legion, followed by Toronto Ultra versus Minnesota Rokkr. The end of CDL Kickoff Classic sees a hyped match between two hyped teams. OpTic Chicago and Los Angeles Thieves fight each other to finish things off right after the Group Selection Show.

Your first taste of #CDL2021 comes this weekend with the Kickoff Classic!

The community is amped for a new competitive event to start the 2021 CDL season. Even if these matches aren’t officially recorded for points, Call of Duty esports is primed to start again. Activision Blizzard changed the prize pool structure too. For each CDL Major, there’s a $500 thousand prize pool where first place takes $200 thousand. When it comes to the Call of Duty League Playoffs, there is a $2.5 million prize pool where the champion takes homes $1.2 million. All in all, 2021 holds a total prize pool of $5 million.

Fans can tune in to the new 2021 Call of Duty League season on February 11 where Week 1 matches start the Atlanta FaZe Home Series. But until then, the focus goes to this weekend’s CDL Kickoff Classic esports event.