After helping to Dallas Empire win the Call of Duty League World Championship this weekend, James “Clayster” Eubanks has been removed from the main roster. Specifically, Clayster is now a restricted free agent on the Call of Duty esports market.

With the heaviest of hearts we are forced to let go of an absolute legend.

We will be forever proud and grateful. Thank you, @Clayster.

This comes just two days after his team became the 2020 Call of Duty League champions. This isn’t the first Clayster was crowned a champion either. He previously won Call of Duty World League in 2019 with eUnited and in 2015 with Denial. The three-time world champion has certainly experienced enough in the scene to be considered a veteran. 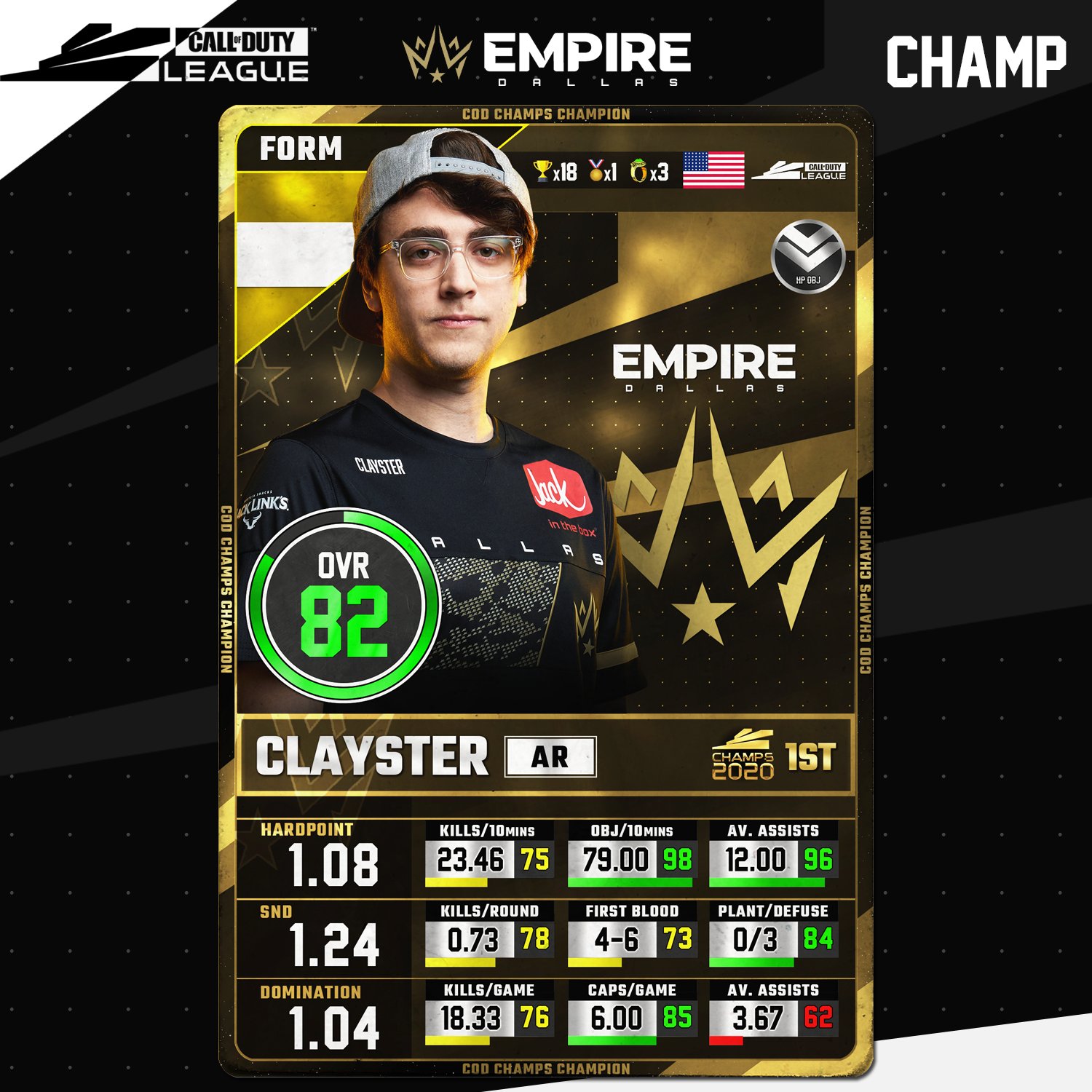 In a TwitLonger, Clayster spoke about his sentiments and feelings regarding his move. His disappointment with the shift is justified, especially because his gameplay was crucial to the Empire’s win. He mentions that he understands why he needs to be sold from a business perspective but still laments his lack of choice in the matter.

I totally understand a numbers/biz standpoint, but it feels really cold to me to win a World Championship for a team and have them force my team option so they can sell me for a buyout instead of letting me walk for free. I know Stro doesn't want that, but man investors stink :/

Although his skill is not in question, the changes come from a new Call of Duty esports format. Yesterday, CDL announced that season 2 of the competition next year will transition from 5v5 to 4v4 format.

In the CoD scene, it’s known that esports players prefer a 4v4 format. Until late 2018, a 4v4 format was the norm. This changed to 5v5 in Call of Duty: Black Ops 4. The issue is that Call of Duty League announced this less than one year after 12 franchised teams signed five players. Now, every CDL team wonders what to do without a need for all five players.

Here’s the deal. I am going to make sure we send @clayster to whatever team he wants. Thats all I need to say.

Envy Gaming team owner Mike Rufail explained that he intends to work with Clayster and get him to any organization he wants. Considering his performance in CoD esports, Clayster may find his way to another strong team. But the same can’t be said for the other 11 teams unsure who to drop and move.

In an exciting flurry of games, Dallas Empire defeated Atlanta FaZe 5-1 in the 2020 Call of Duty League finals. Unfortunately, the excitement was short-lived when Dallas was the first team to announce its planned roster changes. Teams have until September 6 at 11:59 p.m. ET to extend player contracts. After September 13, unextended contracts for Call of Duty League players will end, marking them as free agents.

Right now, fans await what the next announcements will be from CDL, teams, or Call of Duty esports players. Dallas Empire and Clayster are only the first to make esports news about the new CDL format.