Valve’s Diretide 2020 has received positive reviews from the Dota 2 community. The developers retained most of the format and the gameplay from the original Diretide mode. However, there are many new cosmetics and unique features in Diretide 2020 covered in this guide.

Diretide is a 5v5 game mode with two teams competing in a best-of-five series. The objective of each round is to hoard more candies than the opponent, as is expected in a Halloween mode.

There are five possible rounds in a Diretide game. The first team to reach three wins secures the game.

Players must collect taffies (candy), which are available via creep and hero kills, and then deposit them in their Home bucket. Valve has also introduced a new concept with Scarecrow Stashes this year which gives a bundle of taffies in one go. Scarecrow Stashes spawn at one, three, and five minutes, at the top and bottom of the map. These stashes force teams to fight over a new objective.

Killing opponents is a sure-shot way of securing an early lead in the game mode. Since players have respawn timers, any time off the map gives the winning team a huge advantage. Eliminating an enemy carrying many candies also drops those candies on the ground.

Dota 2 players can try to steal candy from the enemy bucket. Hitting the enemy’s bucket will drop candies to the player’s location and reduce their total number of candies. The goal is to win the game with the most candy, but the best way to achieve this objective is to reduce the enemy’s total candies by hitting their Home bucket. However, players cannot hit the enemy bucket whenever they desire. The Home bucket is vulnerable only after Taffy wells go down.

Feed Roshan Or Face His Curse

The map has a comic-book-like design for Diretide 2020. Image credits to Valve.

Roshan is like a small kid walking around the map and demanding taffies from various players. When Roshan comes for candy from a teammate or player, someone needs to give him the candies. Otherwise, Roshan kills the target and curses the team. A curse deals damage over time, although it won’t kill players but renders them weak against opponents. Smart players will press their advantage when the enemy is cursed by Roshan.

Tips and Tricks for Diretide

Diretide returns to Dota 2 in 2020 after seven years and this guide shares what to look out for.

The best way to win this game mode is to place equal emphasis on collecting and depositing candies, as well as reducing the enemy’s tally. So far, Diretide games have shown a 4+1 hero split, with four players fighting the opponent on one lane. The constant fighting allows players to secure the Scarecrow as well as push the lane if they can win team fights with ease.

Each match rewards players with Diretide points and players can claim a prize after every 100 points. They can also get a Hallowed Chest of Diretide, which contains many Immortal tier cosmetics. These cosmetics are unlockable by $2.50 keys that can be purchased from the shop. 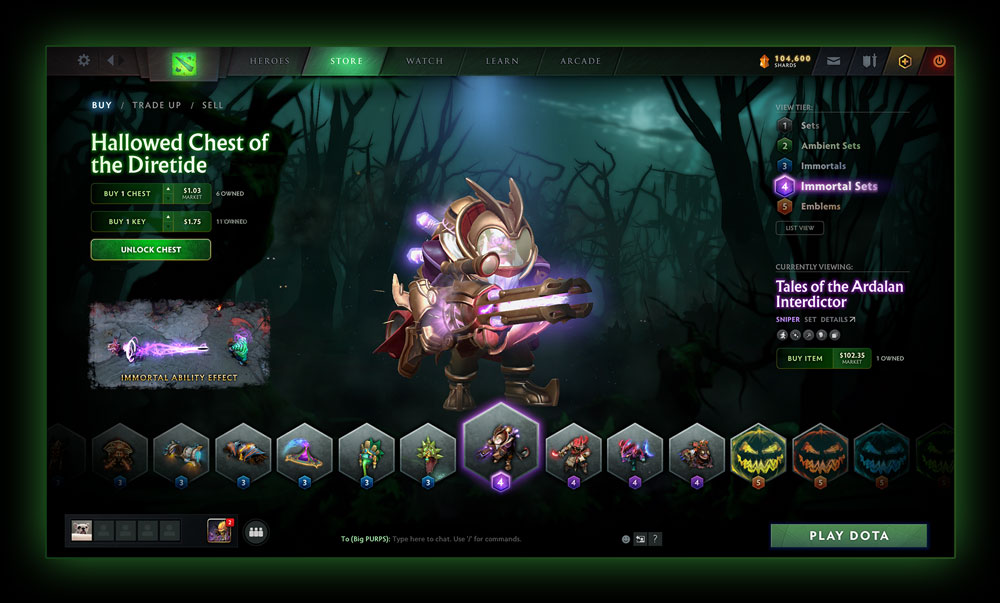 Valve has integrated the Steam market directly into Dota 2. All Diretide items are immediately marketable and players can buy their favorite items without grinding Diretide. Image credits to Valve.

Higher tier Diretide items are rare and the chances of getting them get smaller at the highest levels. Dota 2 players can trade their items to get an item of a higher tier.

Diretide 2020 will be available in Dota 2 until December 22 and this guide will help players find the best strategies. Meanwhile, players can now jump in the game and start collecting taffies.

Apply for Diretide 2020 Guide: Tips and Tricks
Submit application I changed my mind