The International 10’s prize pool just reached the $20 million mark. The International is the most important Dota 2 tournament of the year and features only the best teams. After Valve announced delaying TI10, fans became impatient. However, the release of the new TI10 Battle Pass satisfied fans. For every Battle Pass bought by players, part of the money donates towards the TI10 prize pool. In less than a month, fans purchased enough Battle Pass content and already brought TI10’s prize pool past $20 million.

The International 9 already got the previous prize pool record but TI10 will likely beat it. The success of this year’s Battle Pass made a huge difference. Before the release of the new content, this year’s event was only $500 thousand ahead of the previous one. It was a tight race to see which one will hold the record.

Now, The International 10 holds a huge lead even before July. TI10’s prize pool reached $20 million almost twenty days ahead of TI9’s prize pool. When compared with 2018, the difference is even more spectacular. 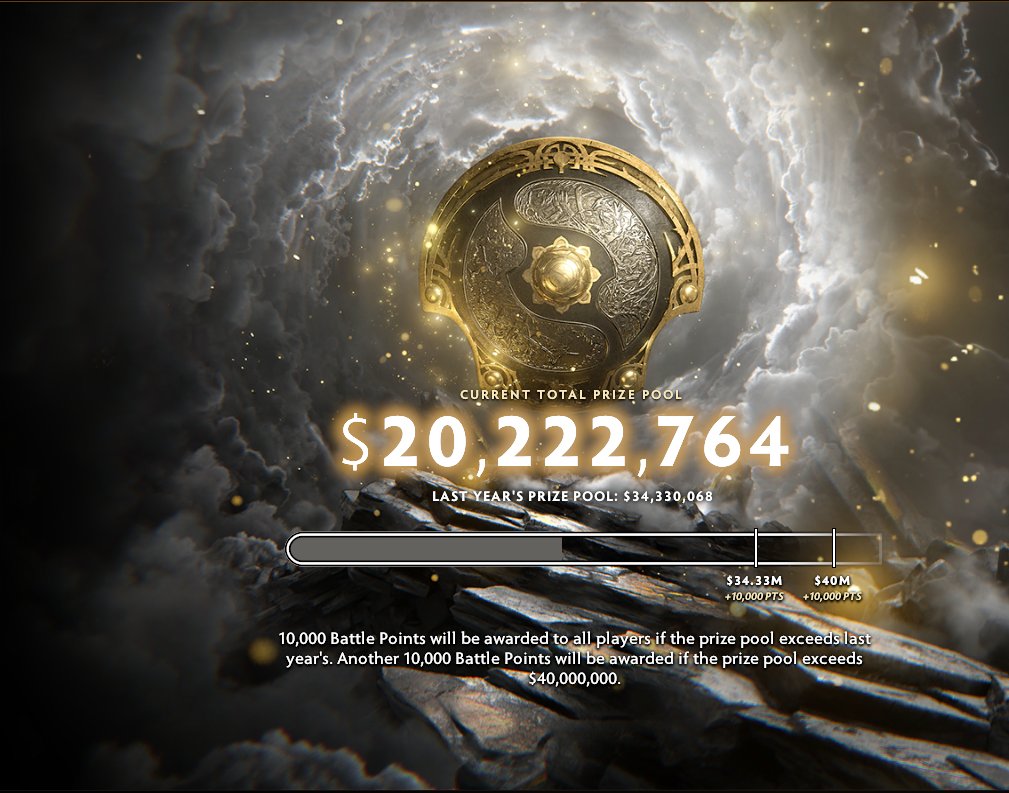 If 2020’s Dota 2 Battle Pass sales follow the usual curve, the final cash prize may pass $40 million, setting a record as the biggest prize pool in esports. Even with a particular environment created because of the pandemic, this is still a big achievement for esports.

The first Battle Pass bundle launched two days ago and leaves the store on June 29. In this period, it is purchasable up to twice by player. This partly explains this cash prize’s fast progress. This bundle is composed of 120 Battle Levels and eighteen Immortal Treasures from I to III for $29.99.

In addition, Valve continues to propose new content, especially after facing criticism for a lack of cosmetics. The next bundles and Immortal Treasure collections will also provide help in setting a record never seen before. For that to happen, the TI10 prize pool needs to go beyond $34.33 million.

By combining cosmetic purchases with Dota 2 esports prize pools, fans now understand they can directly contribute to the esports scene. They want to be part of groundbreaking records and esports history. Valve set up a perfect strategy to break records with Dota 2’s The International 10 prize pool.