A few things may still change but most of the directions are here. Yorick was overdue for some of this work for sure. pic.twitter.com/8zjSy7WswJ

Based on what’s revealed from Mark, this patch wants to nerf common complaints like Hecarim, Rell, and Everfrost. In particular, this patch targets Yorick, who’s been on the backburner for quite a while. The champion unintentionally created confusion with seemingly random turret targeting. Now, he receives a buff to strengthen his mist walkers and maiden in exchange for them tanking turret. Mist walkers make their first attack when jumping on targets and the maiden gets prioritized last from turret shots unless they attack enemies.

The Yorick buffs will greatly help players since he’s struggled ever since the new Mythic item rework. Another important change comes to Turbo Chemtank, which nearly every tank looks to rush. For League of Legends Patch 11.7, Riot lowers the movement speed it provides from 75% to 60% and increased the slow it deals from 40% to 50%. Essence Reaver also got a large nerf with an extra 100 cost increase and 10 attack damage removed from its stats. 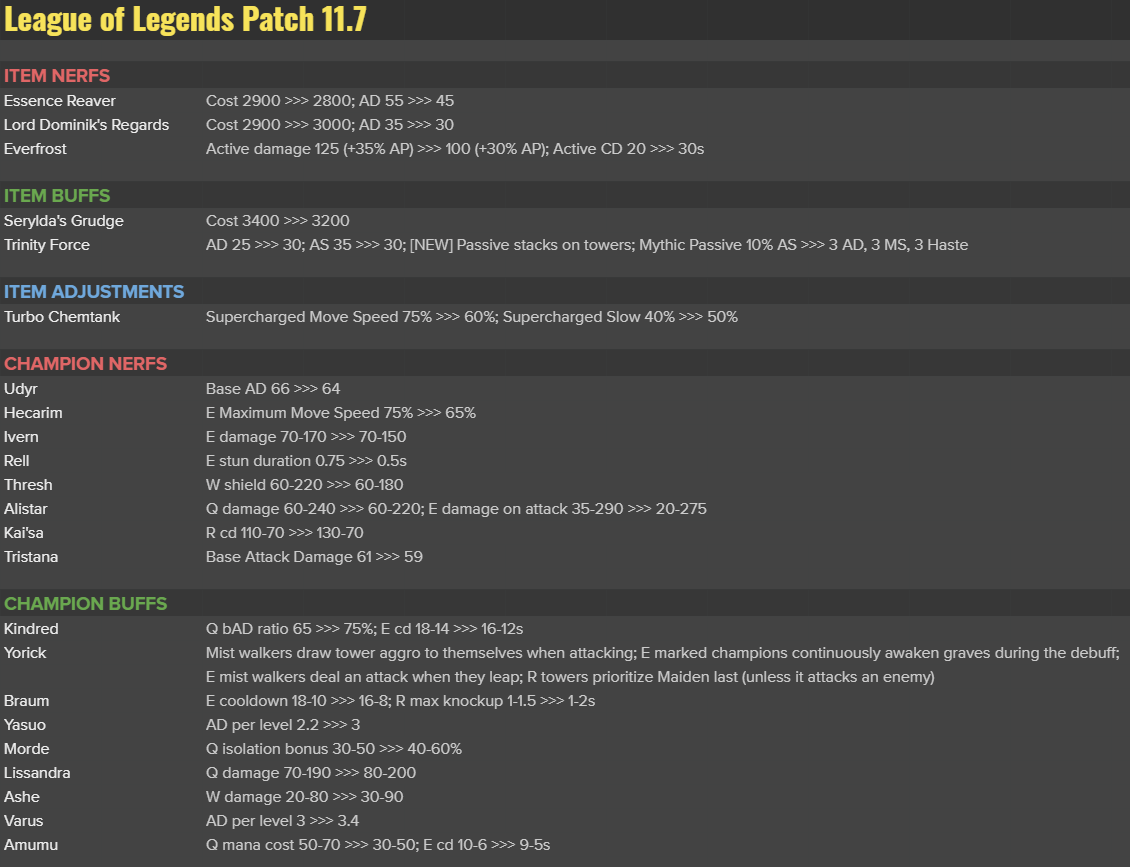 Regarding the champion changes, the biggest shift goes to Amumu buffs. His Q mana cost gets lowered by 20 at all ranks and E cooldown drops by 1 second at all ranks. These buffs can help him up ever since he saw back-to-back nerfs at the start of League of Legends Season 11. Udyr gets another nerf after he popped up into the meta and loses 2 base attack damage. Other common picks getting nerfed include Hecarim, who loses 10% movement speed from his E, and Rell, who loses 0.25 seconds on her E stun duration.

League of Legends Patch 11.7 updates live in a few weeks but the preview is out now. Although these changes are still subject to change on the PBE, Yetter assures they’re mostly finalized. Riot Games continues to take care of the League community with detailed patches and previews posted early.

Mirage Esports partners with Under Armour

Apply for League of Legends Patch 11.7 Preview
Submit application I changed my mind