10.19 Preview with full changes:
-We got some more 10.18 data and Talon and Nunu are actually not as strong as they previously appeared (both nerfs removed)
-Seeing some risk that Akali/Lucian could take over the worlds meta and might be 100% p/b (added small nerfs) pic.twitter.com/dvZ9ZC3xAD

This patch updates many damage champs with small buffs and nerfs others who see too much play. Arguably the largest buffs are to ability power playstyles with Ahri and Udyr’s Phoenix Stance. After her mini-rework in League of Legends Patch 10.18, the nine-tailed fox sees a follow-up buff to her W. Fox-Fire will receive a shorter cooldown from 10 – 6 seconds to 9-5 seconds and a lower mana cost from 55 to 40.

Riot Games will also put some power into Irelia. Though she is consistently a strong pick in the competitive scene, there is less focus on her ultimate’s initial damage than Riot wants. The Worlds patch forces players to respect her ultimate ability, especially the wall left behind. Irelia’s R, Vanguard’s Edge, sees its base damage increased to 125 – 375 from its previous 125 – 325. The leftover blade wall now deals a base damage of 125 – 375 instead of the previous 125 – 275. These are major buffs to her late-game power so teams will want to watch her new scaling power levels.

Other champs who received buffs include Sivir, Vayne, Aphelios, Sylas, and Ivern. Nerfs will go to Azir, Twisted Fate, Caitlyn, and ADC Senna. Nearly all of these champions are popular pro picks. 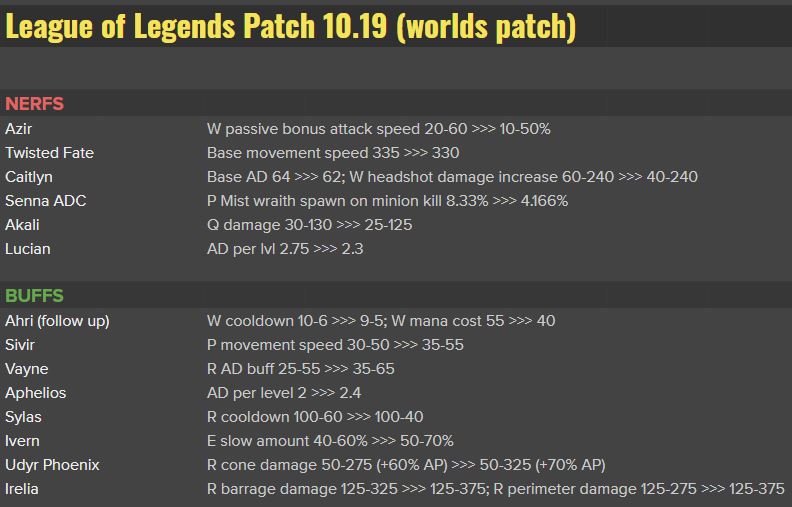 These buffs and nerfs make big changes to how League of Legends esports teams will play. The new League patch targets many champions seen particularly in the esports meta since this update is what will be used for Worlds 2020.

Mark specifically mentions Lucian and Akali as targets Riot Games wanted to improve. The two champions have seen lots of play in the professional scene, so they saw slight nerfs. Lucian’s attack damage per level is decreased to 2.3 from 2.75 to stop a bit of his scaling. Akali’s Q, Five-Point Strike, is seeing a nerf to reduce the base damage from 30 – 130 to 25 – 125. Both changes are very minor, implying that Riot still wants Lucian and Akali playable, but not pick or ban champs.