League of Legends esports teams MAD Lions have won their first-ever League of Legends European Championship (LEC) title after a reverse sweep against Rogue in a historic Spring Split Playoff finals. After G2 Esports’ loss on Saturday, the finals between Rogue and MAD meant a new king in Europe will emerge. MAD Lions proceeded to secure a 3-2 victory against Rogue to represent Europe at the 2021 Mid-Season Invitational.

The LEC Playoff finals began with a dominant performance from Rogue in the first two games. From drafts to mechanics, they outclassed MAD Lions, who found no impacts early on. Although the first game started slowly, Rogue soon switched up the pace of the game and forced fights. Their bot lane duo of  Steven “Hans Sama” Liv and Adrian “Trymbi” Trybus performed exceptionally well against their counterparts.

Unlike game one, game two was much closer between both teams. Even though MAD Lions held the better late game scaling composition, Rogue’s early advantage helped them secure victory. Rogue closed out game two after taking the dragon soul and multiple team fight wins. 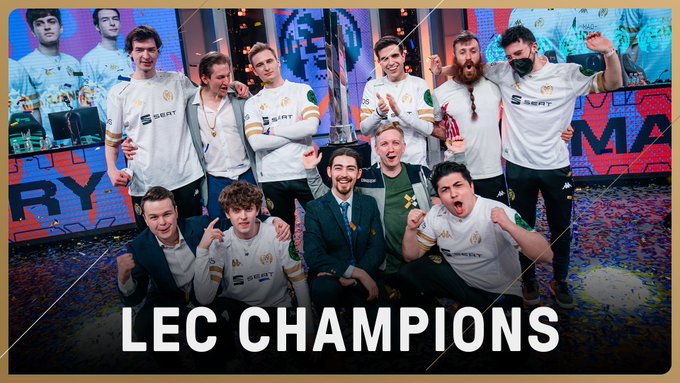 MAD Lions needed to play perfect League of Legends esports since they were one game from losing the LEC Spring Split Playoffs. With their backs against the wall, MAD players stepped up in a must-win game three. Irfan “Armut” Tukek on the Wukong dominated top lane and also helped his team secure the win in this game. His Wukong together with Marek “Humanoid” Brazda’s Orianna brought 23 kill participations for both players, carrying the team to a game four.

Furthermore, MAD Lions carried the momentum into game four and played even better here. Armut repeated his excellent performance once again on Wukong. Rookie of the Split, Javier “Elyoya” Prades, was also instrumental to the team’s win with 11 kill participation on his Udyr.

MAD Lions forced the series to a game five and eventually edged out a win in just under 23 minutes. Rogue looked poised to lift the trophy with a 2-0 lead but fell apart. MAD Lions showed the spirit and character to pull off a massive comeback.

MAD Lions’ emergence as the 2021 LEC Spring Split champions spells a new era for League of Legends esports in Europe. For the past seven years, FNATIC and G2 Esports have dominated and won every title. This is also the first time in Europe post-season history that neither G2 nor FNATIC made finals.

The finals between Rogue and MAD Lions were a welcome change for the LEC. It also shows the positive impact of talent development in Europe’s lower leagues. Since G2, the defending MSI Champions, failed to qualify, MAD Lions have big shoes to fill as Europe’s top League of Legends esports team.