The ESL Pro League NA and EU tournaments have concluded with Team Liquid and Fnatic emerging as winners. While Team Liquid had a relatively easy time in the finals against Evil Geniuses, Fnatic barely edged out mousesports in the best of 5 EU grand finals.

The COVID-19 outbreak compelled ESL to divide ESL Pro League Season 11 into two online-only leagues, one for North America and the other for European teams.

Team Liquid had a one-game advantage over Evil Geniuses coming from the upper bracket. They continued their dominance over their local rivals, defeating them for the third time in the Pro League, this time in the finals.

The final scores for the NA Grand Finals for Team Liquid are listed below.

Keith “NAF” Markovic led Team Liquid from the front as the best player in the server for the finals. 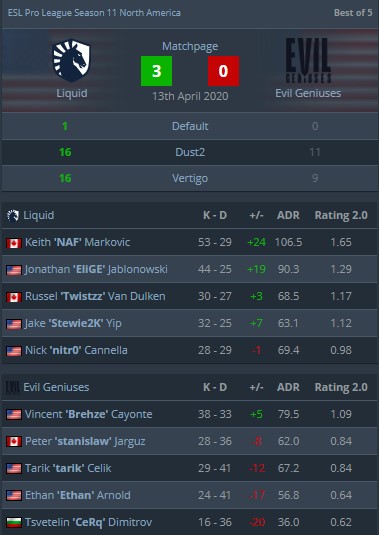 Team Liquid had a strong start on both maps and EG was always playing catch-up. Despite their best attempts, EG’s players were no match for Elige and his team. The grand finals victory was the third consecutive win for Team Liquid over Evil Geniuses at ESL Pro League NA. It was also Team Liquid’s ninth consecutive victory against their NA rivals.

With a clean sweep in Grand Finals, we are your #ESLProLeague Season 11 Champions ?#LetsGoLiquid pic.twitter.com/Oglg1amCn0

Becoming the winner of the NA ESL Pro League, Team Liquid secure $90 thousand in prize money, while Evil Geniuses will take away $45 thousand.

The European Pro League was much more competitive, with the series going the full distance of five maps. Fnatic won the first two ESL Pro League tournaments, while mousesports are the current champions after their Season 10 Pro League victory in Odense.

Fnatic started strong in Map 1 with a 16-11 victory over mousesports on Overpass. However, they bounced back on Dust 2 and then took the series lead on Fnatic’s map pick of Vertigo. With their backs to the wall, Robin “Flusha” Rönnquist, Jesper “JW” Wecksell, and Freddy “Krimz” Johansson led the way for Fnatic on Nuke. Flusha’s aggressive flanks helped him secure an ace in the third round of the map. Fnatic won on Nuke, 16-1, a dominant scoreline putting immense pressure on mousesports’ players for the final map.

Fnatic tied the series 2-2 after their Nuke victory. The final map for the EU Pro League was Mirage, one of the strongest maps for both teams. Fnatic had a slim lead at half-time with an 8-7 scoreline. Despite their best efforts, mousesports did not put up a strong enough defense. As a consequence, Fnatic won the final map 16-12 after a powerful performance throughout the series.

Here are the final scores for the EU Grand Finals.

With this victory, Fnatic won $110 thousand, while mousesports won $65 thousand in prize money.

Check out EsportzNetwork’s podcast for the latest esports news and interviews.