Although the 24 Hours of Le Mans endurance race was postponed earlier this year, FIA organizers are hosting an online 24 Hours of Le Mans this weekend. This esports racing competition features two hundred individual racers competing for fifty different teams. 24 Hours of Le Mans Virtual includes realistic driving conditions, with a full day-night cycle and weather simulation. Dmitry Kozko, the CEO of Motorsports Games joined the Esportz Network Podcast to talk about the unique nature of Le Mans virtual and the ongoing explosion around SimRacing in esports.

Racers compete using the rFactor 2 racing sim. Teams can choose their vehicles from virtual manufacturers like Toyota, Porsche, and Aston Martin. Cars will be susceptible to damage and race teams will have to strategize pit stops for tire changes and refueling. Luckily, teams won’t have to worry about tires thanks to Michelin.

As official partner of the Le Mans 24 Hours Virtual, @Michelin is providing ‘virtual’ tyres for all 50 cars.

From real to virtual, tyre strategies promise to play a key role in the fight for victory.#LeMans24Virtual #PerformanceMadetoLast #MichelinLeMans pic.twitter.com/KAnY5i3Y37

The weather conditions in-game may also provide a challenge for the racers. FIA officials plan to set the weather “in confidence” in order to provide racers with a challenge to adapt. The race will begin on June 13. Fans can see the list of where to watch in a graphic provided by the organizers. 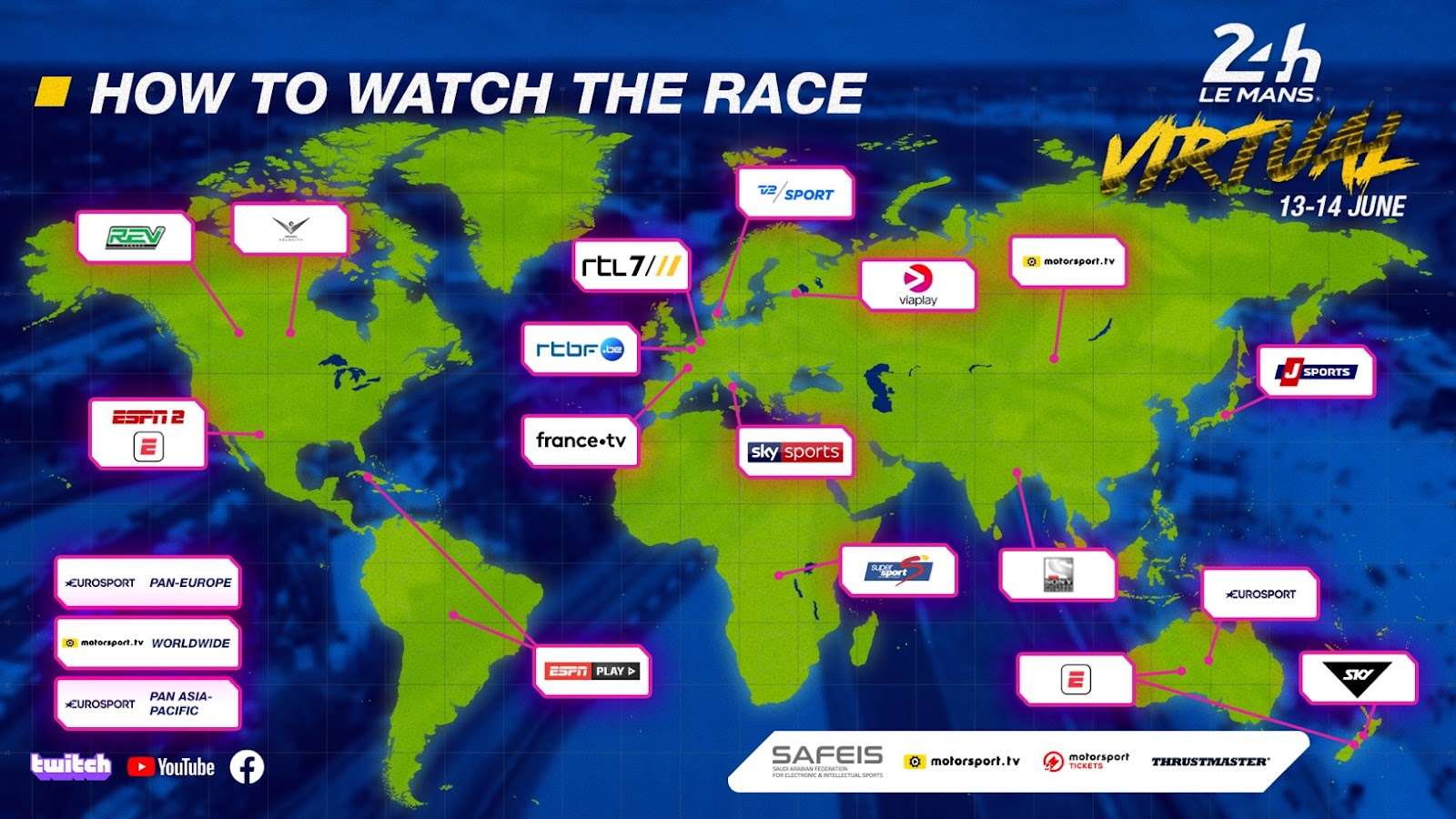 In an interview with Autosport, FIA World Endurance Championship CEO Gerard Neveu stated that the event will be treated with the same seriousness as a real-life one. Simon Pagenaud, who intentionally crashed into Lando Norris during the IndyCar iRacing Series, will be competing. Since some racers may have practiced bad sportsmanship in the past, the team format will help keep these drivers in line.

“We’re trying to maintain all the spirit of Le Mans, the team spirit, which is very important.” said Gerard Neveu. “It’s four drivers, not only one. So if you start to do something wrong, you penalise your colleagues directly.”

Teams will be required to have at least two professional race car drivers and two pro esports drivers. Each racer will be required to race for at least four hours but not more than seven hours. This means that although the event is 24 hours, there will be some downtime for the drivers.

This Le Mans Virtual is only on its second iteration but sponsors seem hopeful that the event will draw in a crowd. Rolex, Michelin, Good Year, and others all stand behind the event. This competition also raises funds for COVID-19 research through the Princess Charlene of Monaco Foundation.

Fans can also take part in a virtual concert that takes place on June 13 hours after the race starts. If all goes well, the event may become a staple for FIA. With enough viewership, the race could stand alone. FIA could also continue to host the virtual contest in order to build excitement for the real race. No matter what the future holds, the 24 Hours of Le Mans Virtual should be quite the show.