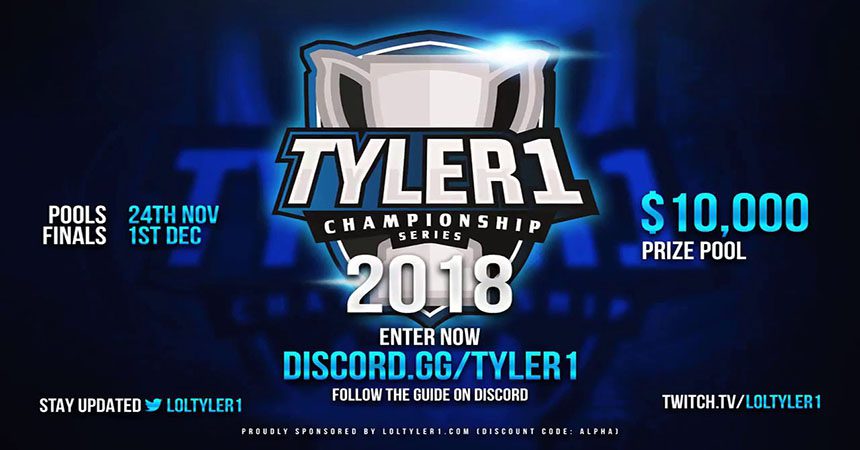 As the year’s final international League of Legends event, the Tyler1 Championship Series kicks off from December 14 to 15, with Grand Finals on December 21. The tournament will be streamed on Tyler’s Twitch channel, with players competing for $50 thousand.

TCS 2019 will have 16 teams participating. Teams are chosen through applications on Tyler “Tyler1” Steinkamp’s community Discord server. But despite the open application process, teams feature streamers and semi-professional level players.

Teams like Polar Ace, the previous TCS winners, are expected to showcase. Polar Ace is a North American team competing in lower-level tournaments like the Scouting Grounds Circuit. Along with them, the infamous Delta Fox made an appearance in 2018’s TCS. Danny “Shiphtur” Lee, former mid-laner for Delta Fox, already announced his participation. The TCS may not show top professionals, but it is sure to provide a competitive tournament.

The TCS is ready for its third iteration and is expected to continue. Hosted and produced solely by Tyler1, in 2018, it reached a peak concurrent viewership of 123 thousand. A prize pool of $50 thousand is provided completely by Tyler1 himself. The show functions on the support of zero sponsorships. Even the mid-roll advertising break is performed and created by Tyler1 himself, much to fans’ delight.

Riot Games’ All-Stars 2019, a recent Riot Games produced event, reached a peak concurrent viewership of 293 thousand. Even with the tools and resources of a powerful company, Riot managed just over double the peak concurrent viewership of the TCS. After Riot monopolized the mainstream professional League of Legends scene, viewerships were dominated by the LCS and other Riot leagues. It wasn’t until the premiere of the TCS, that a minor tournament could ever rival an official event.

There are many reasons that an event like the TCS could fail, but Tyler1 proves its success. Not only is he a popular streamer with a wide following, but he provides unmatched dedication and love for the League of Legends community. Tyler1 manages what few tournaments did. He created a tournament reminiscent of the passion from the early days of League of Legends.