After an entertaining round of quarterfinal matchups at the 2020 League of Legends World Championship, four teams have emerged to the Worlds 2020 semifinals. These four teams include DAMWON Gaming, Top Esports, G2 Esports and Suning.

The Worlds 2020 quarterfinals saw some of the greatest game series ever recorded in League of Legends esports history. The first best of five was an all-Korean showdown between DAMWON Gaming and DRX. But DAMWON dominated the entire series against DRX with a clean sweep. This win was a repeat of the LCK Summer Split finals story. Then, Suning caused a huge upset as they edged out China’s second seed, JD Gaming in a 3-1 win. 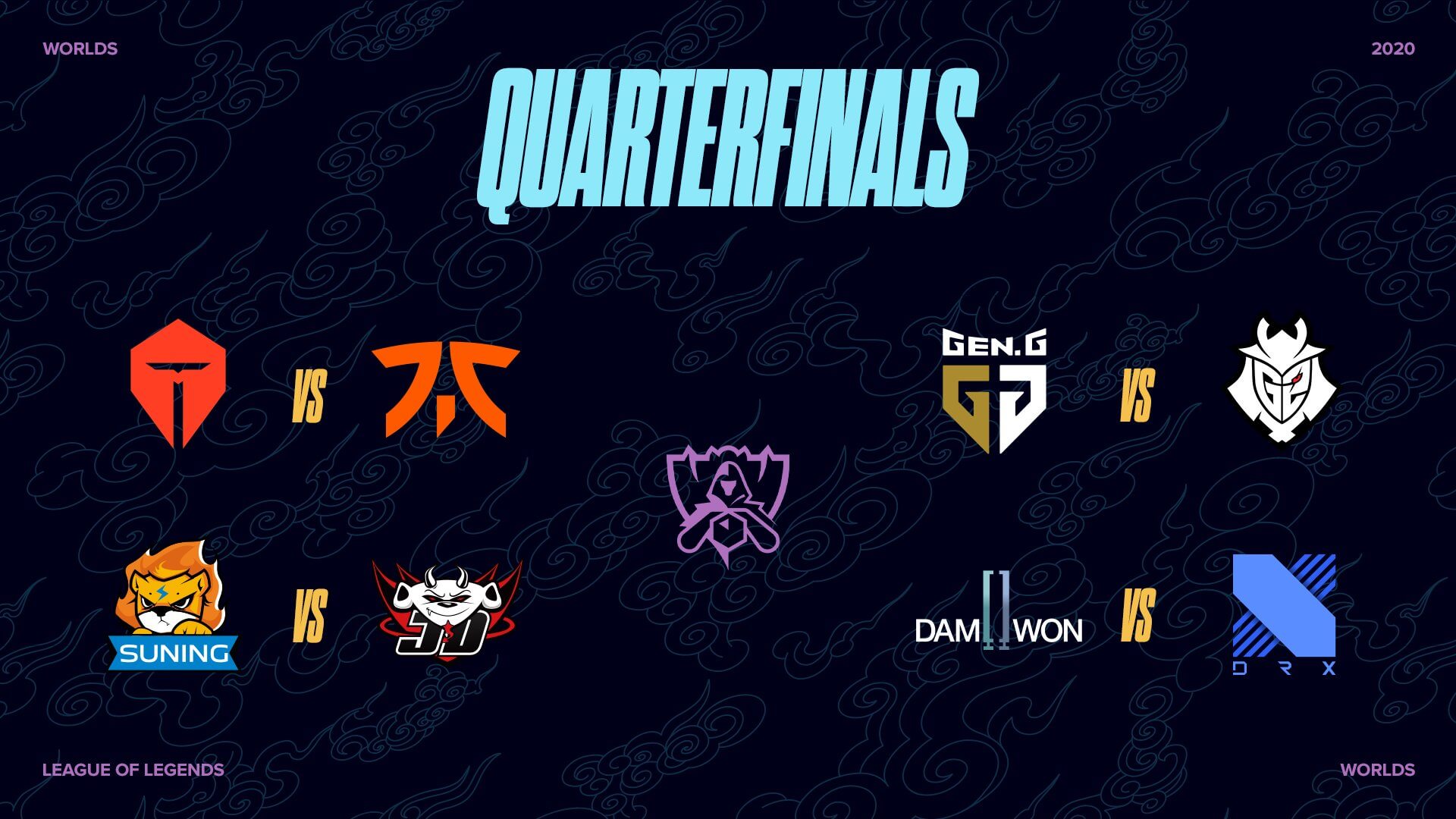 For Top Esports, they not only advanced to semifinals but made a League of Legend Worlds record. The LPL’s first seed became the first team ever to win a series through a reverse sweep at Worlds. They came from behind to beat Fnatic after losing the first two games of the best of five series. The last game of the quarterfinals saw G2 take out Korea’s Gen.G Esports.

This Worlds 2020 semifinal looks to be a battle of the best League of Legends esports considering the teams involved. Top Esports, G2 and DAMWON Gaming are all first seeds of their respective regions. Even though Suning is the LPL’s third seed, they beat G2 twice in the group stage and topped their group.

While Top Esports are tournament favorites, Suning’s accomplishments so far cannot be ignored. Top’s series against Fnatic was also a hard reset for the roster as they had to stage a comeback to win. Both Hung “Karsa” Hao-Hsuan and Yu “JackeyLove” Wen-Bo were instrumental to the team’s win against Fnatic. JackeyLove’s team fighting ability greatly helped the team in game three of the series to turn things around.

WHAT CAN JACKEYLOVE DO? #Worlds2020 pic.twitter.com/62phqf4Z7f

It is clear that Suning will need to stop both Karsa from making crucial roams and quickly eliminate JackeyLove in team fights. Top must also watch out for Suning’s top laner, Chen “Bin” Ze-Bin, and bottom laner, Tang “huanfeng” Huan-Feng. Bin on champion Gangplank poses a huge threat, especially in the early phases.

The other semifinal series is between G2 and DAMWON Gaming. These two teams are the last hope of their various regions. For G2, they are actually the last hope of the west as all other western teams failed to make it this far. The stakes at this best of five series could not be any higher.

Take a look back at the #Worlds2020 Quarterfinals with our @AXE Highlights! #Axe pic.twitter.com/TmN9Y7GH2o

For the most part of Worlds 2020, DAMWON Gaming has certainly looked like the most cohesive team. Their macro play and ability to fully dominate a game is almost unmatched. In addition to this, the Korean champions have only lost to JD Gaming in the group stage.

Although G2 saw an unimpressive finish in the group stage, fans still believed they would win the series against Gen.G. G2’s win against Gen.G makes it their third Worlds semifinals entrance in a row. At the 2019 League of Legends World Championship, G2 knocked out Korea’s famed T1 to advance to the finals. The European giants will look to repeat the same feat again. However, DAMWON Gaming is no T1 or Gen.G.

The 2020 Worlds semifinals begin on Saturday at 3 AM PST. Tune in to Twitch or YouTube to see which teams advance to the final.